March 10, 2016
By: Andrew Bermudez
(Mustache Maniacs Film Co. Headquarters; March 10, 2016)
It's been busy here at the studio, but we have a new update ready to go, now that the flu has subsided. Let's take a look at what's going on!
Because the flu epidemic is over, we are glad to say that our long-delayed work on getting the rest of Alpha Team: Mission Deep Jungle finished is now back on track! We're currently filming inside the film's last set, with editing happening simultaneously. We're looking to have the rest of the film out in late March-early April, but we have wonderful news for all of you: as an apology for the delays in the release of the next part, we're going to release the rest of the film on the same day! That's right. The film will then only be three parts, but we think that you will enjoy the rest of the movie nonetheless. As an extra treat, here's a screenshot from the most recent shoot. 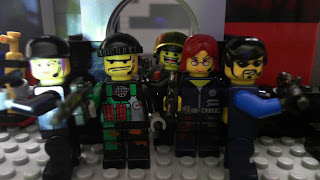 However, there is some news that we think that you may not be happy about. As a result of our new auto cancellation policies, LEGO Island: The Animated Series has been cancelled. This sounds disheartening, but Mark Matthew, LEGO Studios CEO, recently stated, "We still want to explore LEGO Island and the rich library of characters that it provides. It may not be in the form of an animated series, but we want to bring these characters to life in a new way ahead of their debut in Legends of the Universe." Also cancelled was a never-announced project titled Cedric's Siege, a medieval musical based on the 2000 Knight's Kingdom LEGO sets. This film's files and documents will soon be released to the wiki and website for public access.
Finally, we are pleased to unveil the official descriptions and release dates for both The Canon that Time Forgot and Mustache Maniacs Film Co.: The Visual Dictionary - 2nd Edition! First, here's the one for the visual dictionary:

Following the highly-popular first edition, Mustache Maniacs Film Co.: The Visual Dictionary - 2nd Edition updates and widely expands the original to include details all about our latest films! Take a visual journey from the beginning of Mustache Maniacs Film Co., with films like Com 50 and Indiana Jones and the Heart of the Dragon, through the years, with smash hits like Mystery at Shady Acres and Johnny Thunder and the Secret of Marco Polo, into the modern day, with New Friends ~ An Environmental Fable and A Bite of MyJobs, and beyond, with titles like B.I.O. Corps and Legends of the Universe! In addition, the book includes a section dedicated to behind the scenes! It's the quintessential guide for any Mustache Maniacs Film Co. fan! - Coming June 25, 2016

And here's the contest description:

All of Mustache Maniacs Film Co.'s movies, comics, and more feature a wide variety of characters, from soldiers, scientists, hillbillies, and adventurers to spies, pilots, pirates, and henchmen. Many of these characters have rich backgrounds that place their history in the official canon, but just as many don't, especially those Cal Pada Guards. Your task is to take an under-developed character from any Mustache Maniacs Film Co. movie and give him or her a rich and intricate background. The winners will have their stories inducted into the official canon. Official rules will be announced at the contest start. - Coming May 1, 2016

So while we've been quiet over the past month, we're about to erupt with a fervor of new content! Of course, this is all in addition to the return of Jolly Roger and the Pirate Queen, as well as the release of Pharaoh's Quest: The Curse of Amset-Ra later this year! There's talk of extending Year of the Clock into 2017, but if that is the case, then that means more time travel content for all of you fans! We will now leave you with another teaser for the new visual dictionary, and we hope to see you all again later this month! 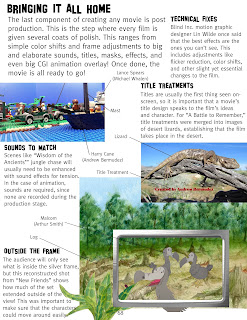