Studio Update: "Out of His Time" is Over and Gearing up for new Adventures!

January 16, 2016
By: Andrew Bermudez
(Mustache Maniacs Film Co. Headquarters; January 16, 2016)
Today, we've got some important news regarding what we're doing this year, so make sure to read through to get the latest news!
After the policy changes made in December went into effect this year, there has been a massive clean-up of the studio's pipeline, including the aforementioned cancellation of Speeder. Today, we are sad to announce that, after just one year, the comic series Out of His Time has been discontinued. The last comic was posted today and can be read by clicking here. So why did this comic series end? We have a few reasons, as outlined here.
Despite this loss, we are certain that the time travel adventures in A Future in the Past will make up for this comic's ending when it is released later this year.
In other news, the winners for THAC XIII have been announced! Rift did not make it into the top 10 list, but congratulations to those who did, especially the three winners: Mech, Fantasma, and Vengeance of a Different Sort. To see the entire top ten, click here.
We are also opening more of our archives for fans on the Mustache Maniacs Film Co. Wiki. While we aren't re-releasing any more of our films beyond Jolly Roger and the Pirate Queen, we have added more information in regard to films, so that all of our films are listed. In addition, we'll be adding several new photos from our archives to fill in the existing pages over the year. During this move, Wiki Mondays: Time Warp will proceed as usual.
However, with these shake-ups, we've realized that the time has come to revise the canon timeline! Some films are being dropped and others are being added, but this is what it looks like now.
This is how it looks right now, but if anything happens between now and the results announcement for The Canon that Time Forgot, we'll update this timeline accordingly.
In other news, it was long-delayed, but Mustache Maniacs Film Co.: The Visual Dictionary - 2nd Edition is gearing up for release later this year! We've still got a ways to go, but work is running smoothly. Here's a sample page from the book for those who are interested. 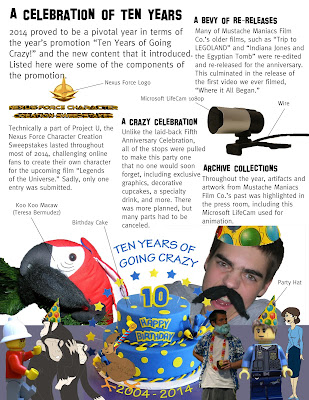 Finally, if you want to take a look at what to expect from DINO ATTACK: Saga of a Conflict, then check out the comic's unofficial wiki page on the Dino Attack RPG Wiki by clicking here. Most of it is nothing new, but it does give you a look at some development artwork, as well as a behind the scenes look at the comic's development. One more thing: if you're wondering when part 3 of Alpha Team: Mission Deep Jungle will be out, all we can say is that we honestly don't know. We're working on it as you're reading this, but we don't have a date set yet.
But wait! We haven't done our plugs yet! Because we're going to reach out to voice actors across the internet over the coming months, we need to remind all of you to SIGN UP FOR AUDITIONS TODAY!!!
1/18/2016 Update: Adam Shefton has just told us that he will not be able to return to play Pvt. Leo Pickford. We'll be updating the "Auditions" page later today to not only open this character for auditions, but also to update the audition sheet for Numb Chuck, JFR6, and MMW4.
1/31/2016 Update: Marcus Hutchinson, creator of Murder in the Karoo, has confirmed that the film takes place in 1890. Because of this, the canon timeline has been updated. We also have not heard back from Sabrina Lewis, Brian Thompson, and Brandon Maddux, so unless they do write back, all three parts that they were going to play will be put up for auditioning in February.
2/22/2016 Update: We've introduced Shootout! into the canon, so now it's part of the timeline.