Showing posts from May, 2011
Show all

A First Look at 'An Afternoon at the Zoo.' 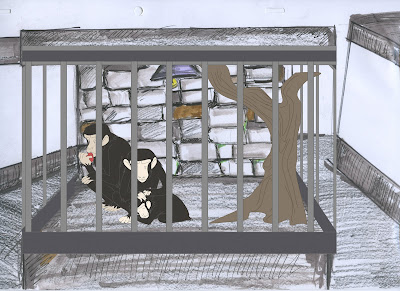 By: Andrew Bermudez (Lego Studios; May 30, 2011)      This Friday, June 3rd, will be the biggest release day in Mustache Maniacs Film Co. history. Two new animated films will be released, which will get Lego Studios' traditional animation department into full swing. These two films are An Afternoon at the Zoo and Space Attack. Sadly, due to issues over release, the previously-announced Yellowstone: The Firestorm of 1988 will not be released. Regardless, while you wait, here is a first look at some of the amazing artwork that will appear in the film.

"I am being perfectly honest that we are nowhere near done with this film," said Steve Brocko, head of the traditional animation department. "If we are going to get this film ready for its June 2nd premiere, we're going to need either nothing short of a miracle or a lot of coffee for our editors." If that miracle or coffee plays itself out, the film will be released June 3rd along with Space Attack, which …
Post a Comment
Read more

Next 'Tales of the Adventurers' Debuts! 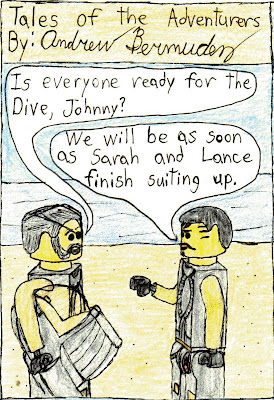 By: Andrew Bermudez (Crazyhouse Comics Studio; May 26, 2011)      To start, here is the answer to the previous challenge: Hidden Henchmen.
There are five henchmen hidden in total. In panel 2, two are hiding behind trees in the distance. In panel 3, one is looking through the window in the tent. In panel 4, two are hiding behind the trees behind Lord Sinister, Patrick, and John Parker.
Now, here's the next comic!


This is the next challenge: Going Nuts and Bolts.      Harry has been spending the entire morning checking the rivets on Mariner 442 (the submersible he is repairing in the comic). He noticed that for every four rivets, only one needed to be replaced. If Mariner 442 has 640 rivets, how many did Harry have to replace?
Be sure to check back here next week, when new info and art is released for the Mustache Maniacs Film Co. website, An Afternoon at the Zoo, Space Attack, and Yellowstone: The Firestorm of 1988. The three films mentioned will be released Ju…
Post a Comment
Read more

"The Duck and the Strawberries" has been Canceled!

May 13, 2011
By: Andrew Bermudez (Lego Studios; May 13, 2011)      Friday the 13th has always been associated with bad luck, and today this rings true for Freddy and Joey - the Duck and the Strawberries. "It's just that no one liked the script," said studio CEO Mark Matthew. "I have to admit it probably wouldn't have been a success, given by the lack of prominent views for the Freddy and Joey Teaser. I still thought it was better than the script for Ghost Pictures, though." The studio will now go back to the feature-length movie concept for Freddy and Joey.
Instead, the studio is teaming up with CarTOON Shack to present An Afternoon at the Zoo. In this short, three chimpanzees are minding their own business when some rude zoo guests begin to torment them. When the chimps let their imaginations run wild, who is the real ape? The short will be released June 3rd along with Space Attack.
Also, the next Tales of the Adventurers will be released next week to make u…
Post a Comment
Read more

Next 'Tales of the Adventurers' is Finally Here! 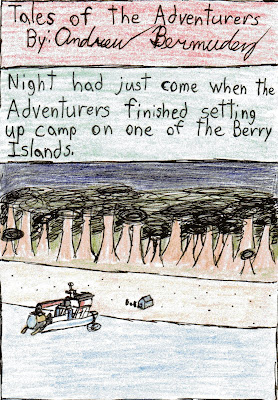 By: Andrew Bermudez (Crazyhouse Comics Studio; May 8, 2011)      Today is Mother's Day, and with it comes the next, long-delayed, comic! Before we begin, however, here is the answer to the previous challenge: Lance's Potatoes.
There are five loose potatoes laying on the floor, meaning it will take 5 half hours (150 min.) to peel all of the potatoes. If there are 500 potatoes, then 500 potatoes/150 min. = 3.33 potatoes/minute (the answer is actually non-terminating, but for simplicity, the answer has been rounded to two decimal places).
Now, here is the new comic!      Now it's time for today's challenge: Hidden Henchmen.
Patrick and John Parker aren't the only two men Lord Sinister brought along! How many henchmen can you spot hiding in today's comic?
However, as a note, Yellowstone: the Firestorm of 1988 may not be featured online, so don't be surprised if you don't see it. As for other release dates, Space Attack will invade June 3…
1 comment
Read more

New Freddy and Joey Teaser and a new Video Announced!

May 07, 2011
By: Andrew Bermudez (Mustache Maniacs Film Co. Headquarters; May 7, 2011)      Today, the teaser for the new animated series Freddy and Joey was released. This teaser may only show two characters (Freddy and Frederick the Frog), but it certainly shows the animation style that will be used for Freddy and Joey - The Duck and the Strawberries, which will be released next month.
Also, a new fire documentary that was mentioned in passing earlier, has been announced! Titled Yellowstone: The Firestorm of 1988, the film will use many of the same techniques that were applied to last year's documentary Worcester Cold Storage Warehouse Fire, including pans, intense music and sound effects to accompany the images. The film will be released later this month.
Check back tomorrow, when the next Tales of the Adventurers goes online!
1 comment
Read more 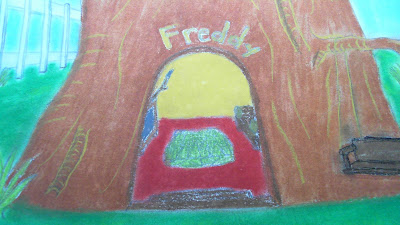 By: Andrew Bermudez
(Lego Studios; May 2, 2011)      Stay tuned to this press room and our YouTube channel this weekend, for some new surprises are coming!
First, after a long delay, the next Tales of the Adventurers will be released here, as well as the answer to the previous challenge. Be sure to check out this long overdue comic!
Also, on the channel, the new teaser for Freddy and Joey will debut this Saturday! Don't miss Mustache Maniacs Film Co.'s first-ever traditional animation! To give you a sneak peek, here is one of the backgrounds, which will also be used in the first episode of the series: The Duck and the Strawberries.

However, due to complications, Making Tracks will have to be delayed indefinitely. Still, other films are right on schedule: Space Attack and an all-new fire incident documentary will appear on June 3rd, The Duck and the Strawberries will come to delightful life on June 6th, Forest of Fear will haunt your way this October, and Johnny…
Post a Comment
Read more
More posts