Showing posts from July, 2019
Show all

Time for Another Canon Update! 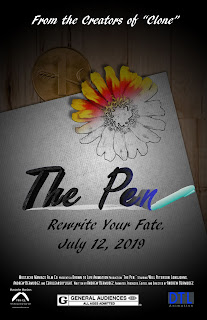 By: Andrew Bermudez (Mustache Maniacs Film Co. Headquarters; July 6, 2019)      We have some important news, including an update our official canon! Let's get started!
"The Pen" Delayed to July 12!

Even though filming concluded a little while back, we were unable to get the special effects for the film finished and working in time. Therefore, The Pen is being delayed to its guaranteed final release date: July 12. "We want this film to look its absolute best," said LEGO Studios CEO Mark Matthew. "Because of this, The Pen will need some more time for our effects team to work out the issues with the film. You will be able to enjoy this unique film on July 12." As shown here, the theatrical poster has been updated with the new release date.

Canon Updates!      Another reason for this article is to showcase how Ocean of Fear fits into our cinematic universe, along with other minute changes, so here's what's new. Ocean of Fear is entering the canon…
1 comment
Read more

July 02, 2019
By: Andrew Bermudez (Mustache Maniacs Film Co. Headquarters; June 2, 2019)      Did you ever wish one of our cancelled films was actually made? Well, next year, we're giving fourteen of our cancelled films another chance at life! Read on to find out more!
Cancelled Film Revival Coming in 2020!      For our twentieth anniversary in 2024, we're going to be long done with all of our special editions, so we're going to celebrate our past that year with an unusual promotion: we're going to revive one (and only one) of our cancelled films and make it into an actual film! We're starting the preparations now so that we can finish the film on time, so next year, we'll put a major question up for the fans to vote on.

Which Cancelled Film Will Be Created?
This is where your vote comes in. We have scoured our archives for cancelled films, and after collecting all that we could find, we curated the collection into the candidates for revival that you can find below. We'…
Post a Comment
Read more
More posts