Showing posts from March, 2011
Show all

Another Tales of the Adventurers and a Freddy and Joey Update 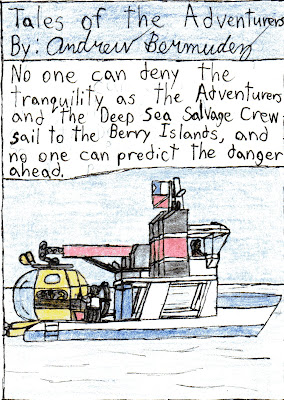 By: Andrew Bermudez (Lego Studios; March 27, 2011)      After a short delay, the next Tales of the Adventurers has arrived! But before we get to it, here is the answer to the previous comic's challenge: Coordinate Confusion.
The correct coordinates for the Berry Islands on the map provided is B-3. Now let's set sail with today's comic. A new standard now will be to feature the challenge afterwards, which will likewise be done here.

Here is the challenge: Lance's Potatoes.      The number of half hours (30 min.) it will take for Lance to peel all of the potatoes around him equals the number of loose potatoes sitting on the floor but not in the pile. If the room contains 500 unpeeled potatoes, how many potatoes can Lance peel in one minute?
In other news, there has been an important update: Freddy and Joey may become an entire movie! "I have plans to make into a traditional animated film," said writer Peter Samuel. "I have an idea to have e…
1 comment
Read more

Another 'Tales of the Adventurers' and New Cartoons Coming Soon! 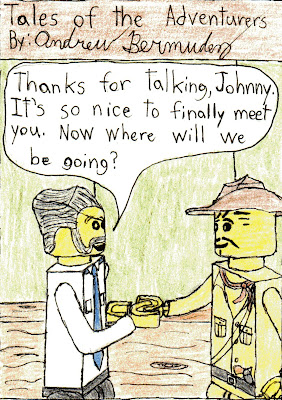 By: Andrew Bermudez (Lego Studios; March 6, 2011)      It's time for another edition of Tales of the Adventurers. But before we begin, here is the answer to the previous challenge: Unwanted Guest.      In the third panel, Lord Sinister is poking out from behind some crates on the dock. How did he find out about the treasure? This could turn ugly!      Now, here is the latest comic. The next challenge will be presented afterwards.
Here is today's challenge: Coordinate Confusion.      Use the navigation map in the comic to pinpoint the exact coordinates of where the Adventurers and Deep Sea Salvage Crew need to go (this one may be a little too easy!).      In other news, details have been revealed about the new cartoons the studio announced two months ago. The new cartoons will be a series called Freddy and Joey. Based on original bedtime stories, the title characters will be two squirrels who live in the vast Mulberry Forest. To give the series a frightening villain, Farm…
3 comments
Read more
More posts