Showing posts from October, 2012
Show all

"Late for the Soccer Match" Debuts, Kicking in the Start of a New Era 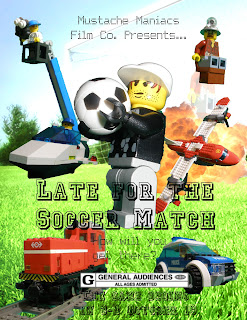 By: Andrew Bermudez (LEGO Studios; October 19, 2012)      This morning, the long-awaited entry to the contest "Kitchen Sink," Late for the Soccer Match, was released, marking the beginning of a new era at Mustache Maniacs Film Co. "This is our first film to initially be released in 3-D," stated LEGO Studios CEO Mark Matthew. "From now on, all of our upcoming films will have the option to watch them in 3-D. Just remember that you'll need red/cyan 3-D glasses to watch any of our films in 3-D." Of course, 3-D will only be available on the actual feature films and any games. After all, why would you want to see a behind the scenes reel in 3-D? That may sound cool, but the extra effort seems wasted. Back to the film, be sure to watch it today! How will you get there? That's for you to decide.      In the meantime, filming for Johnny Thunder and the Wisdom of the Ancients has slowed down again. Regardless, the cast and crew is aiming to be done with th…
Post a Comment
Read more

Jackmarmar writes: Hi, you have an extremely awesome channel, and when will Johnny Thunder three come out, I am dying to see it. Could you subscribe, it would be an honor.
Mark: Once again, due to its complexity and long running time, Johnny Thunder and the Wisdom of the Ancients will have to be released in the summer of 2014. However, a nice coincidence occurred here, since 2014 is the tenth anniversary of Mustache Maniacs Film Co. As for subscribing, don't worry. We've already taken care of that!

That's it for today's edition of Ask Mark Matthew. Don't forget that if you have a question, be sure to send it as a private message to YouTube user historylegoman. Until then, we'll be making movies!
Post a Comment
Read more
More posts