A New Ninjago Short Film is Coming This August!

May 22, 2016
By: Andrew Bermudez
(Mustache Maniacs Film Co. Headquarters; May 22, 2016)
Can you believe it? The summer has only just started, and we've already got another film to announce! The film we're about to announce, however, is a very unconventional one, indeed!
You see, earlier this month, Rebrick announced a new animation contest titled Ninjago: The Greatest Villain of All Time, where participants make a 1-minute film featuring Ninjago villains. After our writing department shuffled through many ideas, we were able to settle on the story we're ready to announce: Ninjago: Visions of Memories! 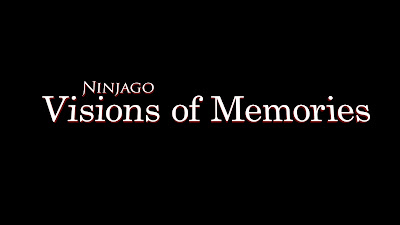 In addition to this title design, we also have an official description to share! Here's what it says.


When Dareth finds the mystical Blade of Recollection, his silly antics accidentally unleash manifestations of Ninjago's most vile villains! With Dareth unable to stop them, it's up to Kai, Cole, Jay, Zane, Lloyd, and Nya to stop these visages of the past and send them back into the blade! But will they be able to stop even the most powerful manifestations?

Like mentioned before, it's only going to be one minute long, so expect this film to be packed with action, humor, and awesome ninja combat! Filming will take place in June and July, with a release on August 5, 2016.
In the meantime, Pharaoh's Quest: The Curse of Amset-Ra is continuing along, but a little slower than expected. Currently the film is staying on track for its August 19 release date, but if it has to be pushed off by a few months, we'll let you know.
We would also like to mention that for our Collectible Characters, series 5 - DINO ATTACK: Saga of a Conflict will be out June 1, along with the first wave of sets based on Jolly Roger and the Pirate Queen. More sets will be out on July 1.
Last, but not least, get ready for "Ten Years at the Sail" next month, because we sure are! Currently, we're assembling the assets needed for the promotion, including the video files for the re-release of Jolly Roger and the Pirate Queen and the images for the upcoming Wiki Mondays: Time Warp articles. To get you into the nautical mood for next month, tomorrow's Wiki Mondays: Time Warp article will be about Mauritius Island from New Friends ~ An Environmental Fable.
Now that all of that's done, it's time for our plugs with links. Click on the ad sentences for more info. VOTE FOR THE THIRD FAN CHOICE AWARDS! SIGN UP FOR AUDITIONS TODAY! ENTER THE CANON THAT TIME FORGOT CONTEST!

You May Also Like:
Looking to June and Beyond!
Happy 12 Years to Us!
LIVE UPDATE: Last Day of Filming for "Mission Deep Jungle" and Other News!
Movie Announcements Movie News Release Date Announcements Sneak Peeks Studio Stories Supplemental Material Year of the Clock