LIVE UPDATE: Last Day of Filming for "Mission Deep Jungle" and Other News!

March 26, 2016
By: Andrew Bermudez
(LEGO Studios; March 26, 2016)
Yes, it may sound weird, but Alpha Team: Mission Deep Jungle technically hasn't finished production yet, but today, with all things considered, that is about to change! "We're currently on the last set for the movie, as we may have mentioned before," said public relations head Sam Snead. "On top of that, we're at a point that, if we work for the entirety of today with only a few breaks, we should have production done by the end of the day." That means that the rest of the film will be coming soon! To keep track of today's progress, we're starting another live update, so check back regularly for updates from the set and more!
(9:30 AM PDT) We're getting ready to film the rest of the film. Everyone's in place, the camera's ready to go, and the lights are all lit up. Lights, Camera, Action!
(11:49 AM PDT) Union Break! The cast and crew is out to lunch, but before we resume filming, here's a screenshot from this morning's shoot. 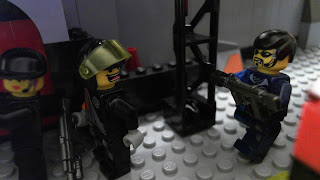 We'll resume filming at about 1:00 PM PDT.
(1:04 PM PDT) We're back from lunch! Everyone is back on set, and we're ready to get the rest of this film made! We'll let you know when we're done.
(3:29 PM PDT) It's official! Filming for Alpha Team: Mission Deep Jungle is over! It was a long time coming, but we are glad to have this out of the way so that we can begin production for Pharaoh's Quest: The Curse of Amset-Ra. In the meantime, we are pleased to announce that the last part of Alpha Team: Mission Deep Jungle will be released on April 8, 2016! More news will follow as we finish cleaning up the set.
(4:38 PM PDT) Like we mentioned earlier this month, as an apology for the delays in filming and editing, the remainder of Alpha Team: Mission Deep Jungle will be released as one part on April 8, but that's not all! We've lagged behind in creating behind the scenes videos, so we're going to be catching up on that over the next few months. The videos that you can expect to see are:


There is a possibility of doing more behind the scenes, but we'll see what happens. In the meantime, we're going to continue post-production for the rest of Alpha Team: Mission Deep Jungle! We'll have one last update tonight.
(7:30 PM PDT) We have some news! While the final part of Alpha Team: Mission Deep Jungle will be out on April 8, we're going to have a new Journey to Siberia comic out on April 1 (no joking)! That day, we'll also begin uploading new behind the scenes videos, as well as pull our annual trick-- oh wait. Did I just write that? Oh, well. This post will no longer be updated. Happy Easter, everybody!
Alpha Team Behind the Scenes Live Updates Movie News Movie Set Stories Project U Studio Stories Year of the Clock