"The Third Fan Choice Awards" is Just Around the Corner! 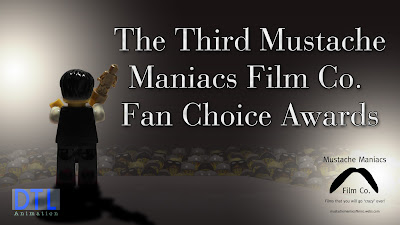 The Third Mustache Maniacs Film Co. Fan Choice Awards is Coming September 1!
If you've been reading this press room lately, it's probably no news that this long-delayed awards ceremony is finally going to debut this Friday, September 1, and we can't wait for Friday to come! If you're like us and want to see the show as soon as possible, we are allowed to reveal a few things to expect this weekend.
All of this, coupled with the opportunity to finally find out who won each award, is sure to get you excited for this Friday! Now though, we need to address something else that happens this Friday.

New Release Schedule Goes into Effect September 1
This is also old news for anyone who regularly reads this press room, but this Friday, we will be relegating all of our release dates to the weekend, and even then, there are certain parameters for these releases. These are:
We'll let you know here when new content is being released on a case-by-case basis, which bring us to our next topic.

Release Date for Crazy Compendium Moves Up!
In a rare instance (at least for us), the upcoming anthology book Crazy Compendium: Literature from Mustache Maniacs Film Co. has moved up its release date! Originally slated for release on November 18, 2017, the book is now moving up to a new and sooner release date: September 15, 2017! We've made some great progress on the book, and since it's now in the final editing stages, we can move up its release date with confidence. And looking ahead to past the original release date, we are currently looking at an upcoming milestone.

Our YouTube Channel (and Johnny Thunder and the Secret of Marco Polo) Turns 10 Years Old in 2018!
We're still in the early stages of planning this, but we are seriously looking at how to celebrate our YouTube Channel's tenth birthday alongside continuing Project U. We do have some ideas in mind, but if you have your own suggestions for this anniversary celebration, leave your suggestions in the comments below. On this subject, this is all that we can say for now, but expect a much bigger announcement as Halloween approaches.

Lead Out
And that's it for today! Are you excited for The Third Mustache Maniacs Film Co. Fan Choice Awards? How about Crazy Compendium? How would you celebrate our YouTube Channel's tenth birthday? Leave your thoughts in the comments below.
Corporate News Fan Choice Awards Milestones Movie News Release Date Announcements Sneak Peeks Year of the Clock