Welcome to Ten Years at the Sail!

June 01, 2016
By: Andrew Bermudez
(Mustache Maniacs Film Co. Headquarters; June 1, 2016)
Summer vacation has just started for many people, which brings up the inevitable question: what will I do? How about spend one month with pirates? Would you do it?
Unfortunately, we cannot accommodate such a vacation opportunity, since pirates are actually vicious outlaws, and doing so would suggest that we condone these behaviors. Instead, to celebrate the tenth anniversary of our classic film, Jolly Roger and the Pirate Queen, we're launching this month-long celebration: 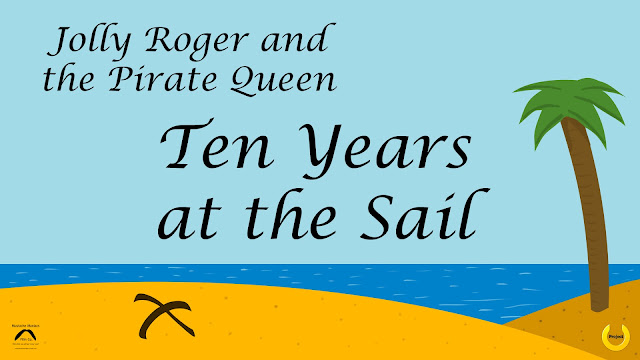 Today marks the official tenth anniversary of the play's performance (it was performed June 1-3, 2006), but we're sounding off this celebration to last the whole month! Here's a look at what we have in store.

Before we begin, here is the final schedule for this month's content that pertains to this promotion.
As always, all is subject to change without notice, but if anything does unexpectedly change, we'll let you know. For now, sail with the tide, and let's begin our pirating adventure!
Corporate News Movie News Project U Sneak Peeks Studio Stories Supplemental Material Ten Years at the Sail Year of the Clock