June 26, 2016
By: Andrew Bermudez
(Mustache Maniacs Film Co. Headquarters; June 26, 2016)
After over a year of preparations, our latest book, Mustache Maniacs Film Co.: The Visual Dictionary - 2nd Edition, has now been released! Go to the library page here to download and read the book today! As for the book itself, it's over 70 pages of facts, information, and fun regarding the entire history of Mustache Maniacs Film Co.! From our first films, like Trip to LEGOLAND and Indiana Jones and the Secret of the Leopard's Treasure, to our latest releases, such as Rift and Alpha Team: Mission Deep Jungle, the book covers every production that we have partaken in. Also featured in the book is a section devoted to behind the scenes, giving a peek at the development process, from script to screen! To further entice you to check out the book, here's a page sample. 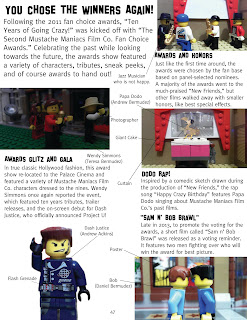 Today is also the last day for the Make-A-Pirate contest. If you haven't entered yet, the contest video can be found here. Whether or not we have any entries, we'll cover the contest results on June 30, when Ten Years at the Sail ends.
Now that all of that's done, it's time for our plugs with links. Click on the sentences for more info. VOTE FOR THE THIRD FAN CHOICE AWARDS! SIGN UP FOR AUDITIONS TODAY! ENTER THE CANON THAT TIME FORGOT CONTEST!
Corporate News Studio Stories Supplemental Material Ten Years at the Sail Year of the Clock