January 02, 2016
By: Andrew Bermudez
(Mustache Maniacs Film Co. Headquarters; January 2, 2016)
Welcome to another live update! Just like before, we'll be updating this post as the news surfaces! There's a lot going on today, so come back regularly for updates!
9:40 AM PDT - We're pleased to announce that our THAC XIII entry will be titled Rift! Like last year's entry The Kingfisher, Rift takes another future character and tells a short story all about that character. This time, it's Dr. Wallace Bishop from DINO Attack: Saga of a Conflict and B.I.O. Corps. We don't have many details to reveal at this moment, but we will reveal more as the day progresses. Stay tuned for more updates!
11:15 AM PDT - It's almost time for our first union break, but filming has yet to start! Fortunately, just about everything is ready to go. All we need to do is to finish the set and then filming can begin. In other news, we're sending out a final casting call for Dr. Wallace Bishop on Bricks In Motion, where we'll decide who will play this character today, as well as in our future movies.
12:51 PM PDT - Our first union break is just about over, and we have some great news: Chris Boyer has been cast for the part of Dr. Wallace Bishop! He'll not only play the character in Rift, but also in our future films! Time to start filming!
2:30 PM PDT - Filming on the first set for Rift is now done! We only have on more set to film on (it's basically the first set re-decorated) before production wraps up! Chris Boyer has also sent in his lines for the film. Stay tuned for more news!
3:28 PM PDT - Filming for Rift is done! If only it were this quick for our other movies...
6:39 PM PDT - We're steadily editing the film, with all of the pieces coming into place. We should have this film done by 10:00 PM PDT.
7:17 PM PDT - Currently, we're rendering the .mov file of the film's animation in After Effects, which will then be sent to Premiere for sound editing. So, while we wait for the file to export, we would like to talk about the new Wiki Mondays for 2016: Wiki Mondays: Time Warp! Just for Year of the Clock, Wiki Mondays: Time Warp is a new take on the weekly tradition of one new page on the wiki. While Wiki Mondays will still focus on new articles, all of the articles for this year will either be about something from our history or future (by at least two years) or about something that takes place in the past or future (by at least twenty years). In addition, one super old or future image (screenshots, concept art, etc.) will be added to an existing page each week. See what this will entail on January 4, when Wiki Mondays: Time Warp officially begins!
9:01 PM PDT - The film is finished! We're now exporting the final .mov file in Premiere, and the film should be ready to go by 10:30 PM PDT at the latest. In the meantime, check out the official page for this film on our website by clicking here!
9:48 PM PDT - It's official: Rift is now online! While the public won't be able to view the film until tomorrow, we do have a way to celebrate: we've got an official poster for the entry! 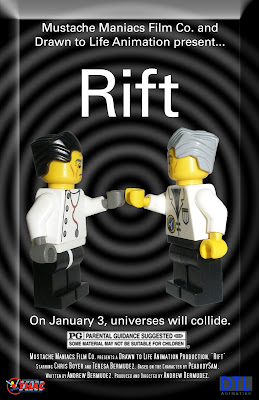 Hearkening back to 1950's science fiction, this poster explores the peculiar event that is Dr. Wallace Bishop's testing of his rift device and the encounter that results. If there are any fans (or authors) of the DINO Attack RPG on here, then you might remember that Dr. Wallace Bishop actually was created for that game. In the official canon, the Wallace from the RPG is the one to the left. The one to the right is Dr. Wallace Bishop as he will appear in B.I.O. Corps. He's from the same dimension that most of the Mustache Maniacs Film Co. Cinematic Universe is based in, which is our own.
Now, with THAC XIII over (at least for us), we will no longer update this press release. However, we will be covering some big news tomorrow, including audition results! Check back here soon!
Auditions Live Updates Movie Announcements Movie News Movie Set Stories Sneak Peeks Studio Stories Supplemental Material