"Year of the Clock" Release Schedule and More News!

September 30, 2015
By: Andrew Bermudez
(Mustache Maniacs Film Co. Headquarters; September 30, 2015)
As we continue working on our various projects, we have lots of news to share! Lets get started!
We're still continuing to work on the Year of the Clock, but we've just finished the final banner! Looking much nicer than the preliminary version (which we now regret showing off), this version is much moodier and has much more polish to it. Like before, Ulysses S. Powell is the only character featured and the central theme is time travel. 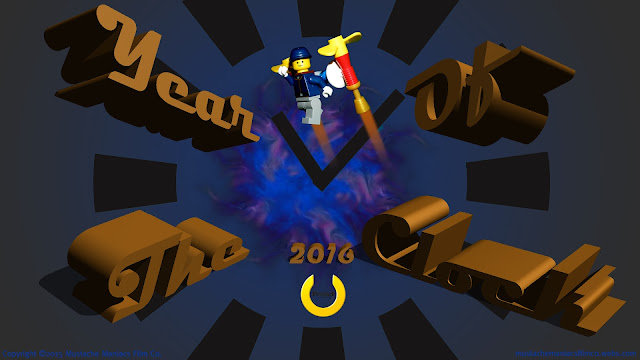 Along with the new banner, we also have a complete release schedule that encompasses all that we have planned for this ambitious project! Here is what it currently looks like.

Year of the Clock Release Schedule:
If anything changes between now and then, we'll keep you informed.
In other news, the long-delayed next episode of On The Set will air this weekend, where Andrew Bermudez will show off the first set for filming Pharaoh's Quest: The Curse of Amset-Ra! The episode will also cover auditions, the Year of the Clock, and what's going on with Alpha Team: Mission Deep Jungle.
But that's not all to look forward to this weekend! We'll also have the next Out of His Time comic out this weekend, as well as updates to the audition sheets. We're also going to be decorating the website for Halloween in the coming days and this year's Wiki Mondays will include four new villain pages: Dr. Jim Carew, Angie Wilberforce, Boz French, and Stanley Larson. Speaking of those auditions, SIGN UP FOR AUDITIONS TODAY!!!