Talk Like a Pirate Day News: Celebrate "A Future in the Past" With 2016 Promotion!

September 19, 2015
By: Andrew Bermudez
(Mustache Maniacs Film Co. Headquarters; September 19, 2015)
Aye, ye landlubbers! Today is Talk Like a Pirate Day, which brings another major announcement! Today, we're introducing our brand-new 2016 promotion to tie into Project U, and it's sure to be the time of your life! Next year is the "Year of the Clock!" 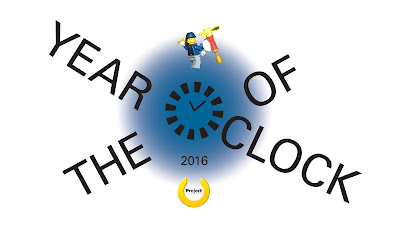 Now don't worry. This, quite frankly, lackluster logo isn't finished yet, but should be by the end of this year. But it does show off what next year's promotion is all about: time travel! That's right! In anticipation of the Time Cruisers-inspired film A Future in the Past, we're dedicating a year to time travel, flashbacks, historical films, and other ways to play around with time. Here's our current line-up.
Pharaoh's Quest: The Curse of Amset-Ra - While this film does not have any time travel in it, it is still historical fiction, making it part of this promotion! Just like its source material, this film recounts the exploits of Jake Raines as he races to stop Amset-Ra from rising again and taking over the world! This film is expected to be released May 2016.
A Future in the Past - This film, based on Time Cruisers, is the film that this whole promotion is gauged around. It pairs up Ulysses S. Powell with Dr. Cyber in a chase across time to stop evil time bandits from the future: Tony Twister and Professor Millennium! But, there are darker secrets abounding, ones that will reshape the Project U landscape permanently! The film is slated for a Fall 2016 release.
Jolly Roger and the Pirate Queen: Ten Years at the Sail - 2016 marks the tenth anniversary of Jolly Roger and the Pirate Queen, so June 2016 is going to be our own pirate month! Throughout June, we're going to re-release Jolly Roger and the Pirate Queen, take a look behind the scenes, talk about integrating the two casts together into one film, host a pirate mini contest, add Wiki pages relating to the film, and more!
The Canon that Time Forgot - After the success of The Quest for Canonization (even though we only got two entries), we're going to host another canonization contest, one that places your story far in the past or future! Rules regarding this contest will be announced at the contest start in May 2016.
These are the only confirmed elements of the promotion. If anything else is added to it, we'll announce it in January.
In other news, filming for Alpha Team: Mission Deep Jungle continues, though after someone pointed out that Star Wars Episode VII: The Force Awakens is also going to be released on December 18, we've decided that that is not the best date to release Mission Deep Jungle. We are looking at late December/early January to re-schedule, but we do not yet have a new concrete date set in just yet.
We are also still looking to fill some parts for auditions, though because of people's busy schedules, we are pushing the deadline back to December 31, 2015. But why wait? SIGN UP FOR AUDITIONS TODAY!!!
Movie Announcements Movie News Project U Sneak Peeks Supplemental Material Year of the Clock