August 17, 2015
By: Andrew Bermudez
(Mustache Maniacs Film Co. Headquarters; August 17, 2015)
Have you noticed that, despite no word about it, Alms Pouch was not released this past Friday? We'll get to why in today's update. Let's get started!
First, the second episode of On The Set will be going online in the next few weeks for September, so be sure to keep an eye out for that, as we'll be focusing on round 4 auditions in that episode. We also have a brand-new and unusual poster for Poster Madness. 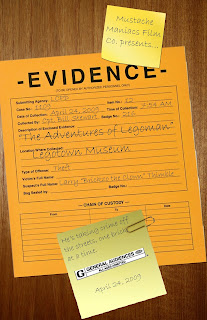 At first, this looks like a picture of a bunch of papers, and you would be right to a certain extent. However, if you look closely, this is actually the theatrical poster for The Adventures of Legoman, designed to look like an evidence file! After six years, the original concept for this unique poster was finally realized. For comparison, here is the original 2009 artwork.
In other news, like mentioned before, Alms Pouch was not released last Friday like originally planned. This is for two reasons.
To take care of this issue, we are going to be introducing what may be our strangest release schedule yet. First, the film as is will be released August 21. That means that the product released this Friday will be incomplete, with many shots still in need of coloring and shading. Then, when clean-up is finished, the final film will be released and the rough version will be removed. Because of this, the poster has been altered one last time to reflect the new release date. 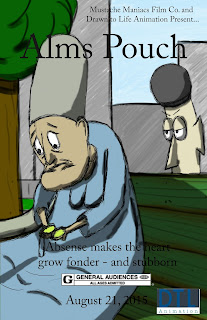 Going backstage, we're almost done archiving our entire film library in HD. The only films left to archive at this time are some vacation videos. Because of this, the DVD Archival Project should be done by the end of this month.
And that is all that we have today. Stay tuned for more news and announcements from this press room, including the official poster for Alpha Team: Mission Deep Jungle, coming soon! Until then, SIGN UP FOR AUDITIONS TODAY!!!
DVD Archival Project Movie News Release Date Announcements Sneak Peeks Supplemental Material