"Our Good Neighbor" Has Been Cancelled!

July 02, 2015
By: Andrew Bermudez
(Mustache Maniacs Film Co. Headquarters; July 2, 2015)
Just one day after submitting the script for review, we have some news that surprised even us. The upcoming Darkness and Light entry Our Good Neighbor has been cancelled! How this came about was actually kind of funny, according to resident scriptwriter Peter Samuel. "Yesterday, I sent the script to the producers to see what they thought of it. They hated it so thoroughly, they scrawled several jokes on the cover, chanting 'Our good neighbor State Farm is there,' before throwing it in the trash. Getting back to business, they said that it had no substance and no plot." After taking a breath, he continued. "First, it's 'Like a good neighbor, State Farm is there,' second, I was following their orders to make an edgy script that fits into the cinematic universe."
This then brought up the elephant in the room: hating a script is no reason to cancel it. Responding to this, Peter replied with, "True, but the cancellation was a culmination of other things. First, we're one month into the contest, meaning that we can't afford any major re-writes. Production had to begin now or not at all. Second, We're introducing characters that Mark Matthew wanted in Legends of the Universe. That movie is too big as it is right now and needs to be streamlined, not over-stuffed. Third, we have 8 projects that are currently on-going. Investing in something that isn't going to get attention is wasting our time."
This then brought more bad news. LEGO Studios: The RPG has also been cancelled. "The issue is that everyone on BZPower would rather play the proposed Hero Factory RPG," said LEGO Studios CEO Mark Matthew. "We considered Eurobricks, until we discovered that they have trouble getting people to play Mafia and RPGs there. Therefore, in light of our other projects, we decided to cancel this as well."
To make up for this bad news, here is another poster for Poster Madness! Today's poster is for Com 50, and it's a simple but effective one. 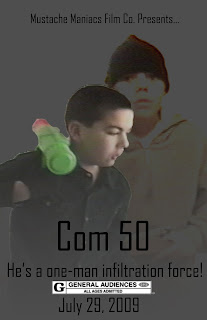 This simple poster is designed to give the Cal Pada Guard a slight visual edge over Com 50, which not only makes the secret agent look a little vulnerable, but also establishes the odds that the hero needs to overcome. That's it for today. Are you sad that we had to cancel another film? Are you getting tired of all of these cancellations? We're actually looking at a possible policy change that will address this issue.
Movie News Poster Madness Project Cancellations Studio Stories