July 01, 2015
By: Andrew Bermudez
(LEGO Studios; July 1, 2015)
On this day ten years ago, the Dino Attack RPG, which is the inspiration for the upcoming comics DINO ATTACK: Saga of a Conflict, officially started on BZPower. Since we are directly collaborating with the RPG's authors to bring the game to life through comics and play sets, we would like to commemorate this day with some teasers! First up is a work-in-progress page from the first book for the series, DINO ATTACK: Saga of a Conflict! Since most of the content is confidential, all of the final text has been removed. 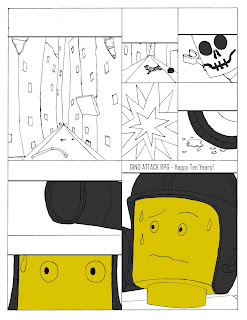