June 24, 2015
By: Andrew Bermudez
(Mustache Maniacs Film Co. Headquarters; June 24, 2015)
June is almost over, and we thought that Alms Pouch would be coming in the next few weeks. Now it's time for an update that explains why that won't be happening.
For the last few weeks, we've been moving to a brand-new location that gives us the flexibility to work on multiple films at once, something crucially needed for Project U. However, the process has been grueling and cumbersome, taking time from all of our projects, including the cleaning up of Alms Pouch and the filming of Alpha Team: Mission Deep Jungle. Because of this, Alms Pouch has a new release date: August 14, 2015. Here is the existing poster, altered to include the new date. 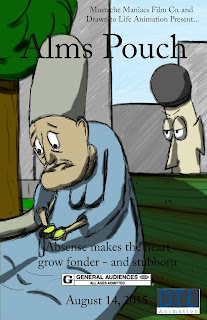 But, if you would like some good news, then we would like to announce that we have an anticipated release date for Alpha Team: Mission Deep Jungle: December 18, 2015! However, judging by the news that preceded this announcement, this date is not set in stone. We would like to inform you it may change without notice.
In other news, nothing may come from LEGO Studios: The RPG. "Instead of giving feedback to adjust and re-shape the game into a workable model, other members of BZPower have been arguing over a Hero Factory RPG," said Drawn to Life Animation head Steve Brocko. "If everyone ignores our RPG pitch, we may have to go over to another site, like Eurobricks." We will keep you informed. Before we go, we would like to remind you that auditions are still open. SIGN UP FOR AUDITIONS TODAY!!!
Alpha Team Corporate News Movie News Poster Madness Release Date Announcements