May 10, 2015
By: Andrew Bermudez
(Mustache Maniacs Film Co. Headquarters; May 10, 2015)
As part of Kilroy Was Here! Month, we are not only looking to the past, but to the future as well! Let's see what we have in store.
In the upcoming animated film A Future in the Past, Ulysses S. Powell and the Time Cruisers chase future criminals Tony Twister and Professor Millennium back through time to stop them from disrupting the past. One time that they go back to is 1943 Sicily, where Private Joe Kilroy and his squad are part of the invasion force on the island against the Germans. While we don't have our wartime heroes ready just yet, we are pleased to reveal the German troops that will be in the movie! 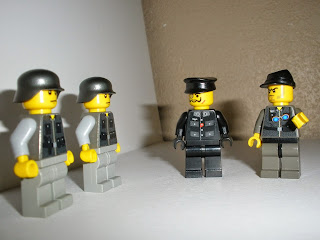 The photo you see here is an asset for a future promotional image for the movie, but for now, check out the designs for these characters! From left to right, we have German Soldier #1, German Soldier #2, Baron Von Stuka IV (because the original Baron Von Stuka from Indiana Jones and the Forbidden Mayan Temple has more relatives than you have fingers and toes), and Fritz. In the movie, these characters capture the future criminals, with Fritz acting as Baron Von Stuka IV's assistant. However, they have no idea who they are dealing with! A Future in the Past is expected to be released in late 2016/early 2017. But if our pool of extra troops looks small to you, don't worry. We have more than those two.
If you like these characters, we are then pleased to remind you that auditioning for the part of Baron Von Stuka IV is still open! This and other parts are all waiting for you in our online auditions! SIGN UP FOR AUDITIONS TODAY!!!

You May Also Like:
Photography From Kilroy Was Here!: A Visual Retrospective
Casting Update: We're Revising Round 3 Casting Again!
Journey on a Massive, Multi-Film Adventure with Project U!
Movie News Project U Sneak Peeks Supplemental Material