"Gone Ice Fishin'" is Released and Another Film is Announced! 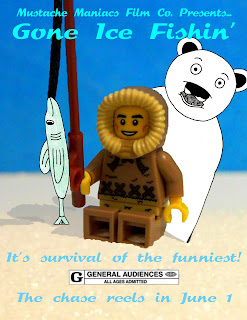 After its 8-month development, the revolutionary brickfilm Gone Ice Fishin' has been released! "Unfortunately," lamented Lego Studios CEO Mark Matthew, "due to unforeseen issues, Night Guard has been delayed until further notice. We're now aiming for June 8th, but that date is not set in stone." Fortunately, this now means that more time can be spent promoting this otherwise neglected film.
After the debut of Gone Ice Fishin', a brand-new film was announced. This new film is titled Late for the Soccer Game. Based on the LEGO Sports sets and created for Bricksinmotion.com's Kitchen Sink contest, this film centers around Peter Whitman, the team captain for the soccer team Hot Shots. However, he's late for the big match and needs to get to the soccer stadium in a hurry! How will he get there? "That's for the audience to decide," said scriptwriter Peter Samuel. "The film always starts the same, but then the audience decides which direction to go. Peter can end up in the forest, or go to the harbor, or end up downtown. There are going to be several combinations, so it's rarely the same movie twice. It will use the same technology behind The Lost Ruby: An Interactive Adventure, but if I were to make a comparison to something similar, I think LEGO.com's Trouble on the Tracks is a better match. Unlike Lost Ruby, you don't participate in the story, but you do determine its outcome." The scheduled release date, predetermined because of the contest end date, will be October 19th. More details will be revealed later.
In the meantime, Zoo Flight will wind its way in this summer, Mystery at Shady Acres returns August 17th, and Johnny Thunder and the Wisdom of the Ancients will be discovered summer 2014.
Film Release Announcements Movie Announcements Movie News Sneak Peeks