October 29, 2010
By: Andrew Bermudez
(Lego Studios; October 29, 2010)
It's almost time for Halloween. Since Forest of Fear will not be released until June 2011, we will cover other news instead.
The filming for Wonders of Buoyancy wrapped up back on Monday. Editing will begin shortly, and the film will be released November 26th, 2010. While you wait, here is a screenshot from that very film. 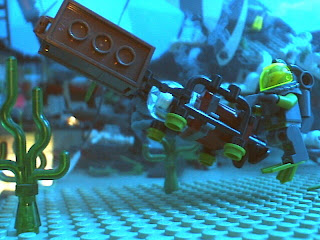 Also, a director for Forest of Fear has been found. Now the film will be directed by newcomer Seth Masterson. Filming will begin December 2010 and may possibly be finished February 2011.
In other news, the next Tales of the Adventurers comic will go online in the first week of November. However, there is no news on how well the first strip is being received. To all of the fans, please let us know what you think of the new comic strip in the comments.
Finally, voting for The First Mustache Maniacs Film Co. Fan Choice Awards is coming to a close. If you haven't voted yet, please do so now. As a notice, all votes received AFTER October 31st, 2010 will be deleted. So vote as soon as possible to make yours count! The winners will be announced at the ceremony in January 2011.
Also at the ceremony, a new character for the Johnny Thunder franchise will give a sneak peek at Johnny Thunder 3, which may come out in 2014.
Fan Choice Awards Movie News Studio Stories