First "Tales of the Adventurers" Comic!

October 21, 2010
By: Andrew Bermudez
(Crazyhouse Comics Studio; October 21, 2010)
Last year, Lego Studios announced that a new comic to tie into Johnny Thunder and the Gift of the Nile would be released. Originally based around the popular henchman character Patrick, the comic evolved into a broader spectrum, so that all of the adventurers characters would be included. Here is the result: the first-ever edition of the comic strip Tales of the Adventurers. Enjoy!

Tales of the Adventurers
Written and Drawn by Andrew Bermudez 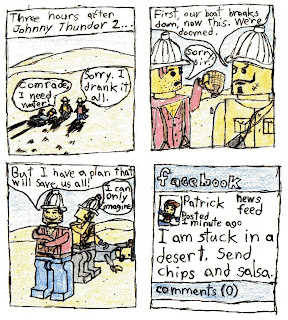 As the story in the strips continues, new characters will be introduced and new tension will be built up to lead into Johnny Thunder 3, which may possibly come out in 2014. More strips will be released bi-weekly.
Also, as a reminder, Halloween is fast approaching. If you haven't voted for the fan choice awards yet, be sure to do so now. When the voting is over, work will begin on the film that announces the winners, The First Mustache Maniacs Film Co. Fan Choice Awards. The film will come out January 2011.
As for other films, Wonders of Buoyancy, an educational film about fluids and floating, will come out December 2010 and Forest of Fear is scheduled for release Summer 2011.
Comic Announcements Comic News Johnny Thunder Patrick Hooligans Tales of the Adventurers