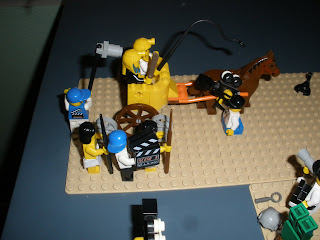 By: Andrew Bermudez
(Desert Plain outside Cairo, Egypt; August 21, 2009)
After several days of filming some of the opening scenes for Johnny Thunder and the Gift of the Nile in Legotown, the crew has now arrived in Egypt. "It has been such an exciting experience, and now we're in Egypt, ready to shoot the rest of the movie," said boom operator Sarah Williamson.
The first scene that will be shot in Egypt is the film's prologue, which takes place in Ancient Egypt. "When writing the script, I wanted the film to have some historical basis," stated scriptwriter Peter Samuel. "When I came across the story of Pharaoh Ramses III, I said to myself, 'this is a really facinating story. I have to choose this one.' I then came up with the idea of a historical prologue with a ficticous ending that ties the treasure into the story." The historical prologue will even include Ramses III's fight against the Sea Peoples, a collection of tribes from the Agean and southern Asia. This battle will feature massive fights on land and sea, all recreated from historical artifacts and documents.
Unfortunately, only two extras for the troops actually made it out to the site for filming. Director Steven Lawrence said, "We were going to have more, but almost all of them passed out from the heat before they made it to the site. Peter Simon, the producer, called them all a bunch of whimps, because they're not even wearing shirts in their costumes. God must have punished him for mockery because now the heat is making him feel faint. Now we'll have the two remaining extras play troops on both sides, and a whole army will be animated in at the editing stage. Despite this, I am very optomistic that the scene will turn out well."
The filming is scheduled to be completed in the late Spring 2010, and the film is scheduled to come out sometime July 2010.
Johnny Thunder Movie News Movie Set Stories