Vacation Update: Passing Through the South

July 04, 2009
By: Andrew Bermudez
(Colonial Williamsburg KOA; July 4, 2009)
It is now Independence Day, and the six-week long vacation continues. Now we are half-way through the vacation, and to celebrate it, we're sending out another vacation update. during this time, we passed through four states: Georgia, South Carolina, North Carolina, and Virginia.
Day 16: Today we drove to the town of Andersonville to visit the National Prisoner of War Museum and Andersonville POW Camp. It was an eye-opening experience. After that we drove to Forsyth, Georgia. We tried to spend the night in the KOA's Kamping Kabin, but it was so cheaply made (the mirror was a shard of an old mirror glued on the wall, insects infested the bathrooms, and the air conditioning did nothing) we had to spend the night in a nearby hotel. 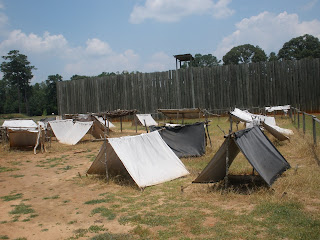 Day 17: We waved goodbye to our first hotel on this vacation as we headed off to Atlanta, Georgia. After accidentally wandering around downtown Atlanta, we pulled into the Georgia Aquarium, world's largest aquarium. We were awestruck by whale sharks, loggerhead turtles, manta rays, beluga whales and hammerhead sharks. Afterwards, we headed to our hotel which, coincidentally, was right by the home we used to live in when we were living in Georgia. 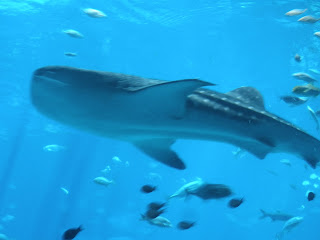 Day 18: Today we went to Stone Mountain, a granite mountain with a carving of Robert E. Lee, Jefferson Davis, and Stonewall Jackson. Their Journey to the Center of Earth 4D was wet but awesome. We also highly enjoyed the Antebellum Plantation and the Great Locomotive Chase Golf. We also thought the Scenic Railroad was really dumb and annoying. We even hiked to the top of the mountain. Mom says, "Oh my!" 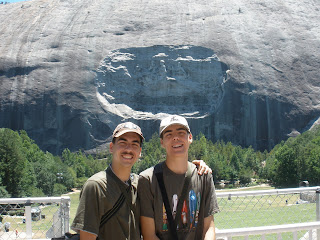 Day 19: Our destination for today was Kennesaw Mountain, a famous Civil War battlefield. Again we found ourselves hiking to the top of a mountain. At least this time we were rewarded with authentic Confederate cannons that had been left behind during their withdrawal.
Day 20: Excitement is in the air today. After hiking yet again to the top of a mountain at Kings Mountain Battlefield, we picked up our dad at Charlotte, NC's airport and transported him to his first camping experience at the city's KOA.
Day 21: Drive, drive, drive!!! We drove for what seemed like forever to Colonial Williamsburg's KOA, where we spent the night.
Day 22: Today we visited Petersburg Battlefield and Pamplin Historical Park. Both are related to the final push of the Civil War prior to Lee's surrender at Appomattox Courthouse. The National Museum of the Civil War Soldier at Pamplin is a must see for anyone in the area. 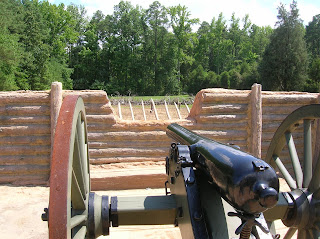 Day 23: It's the 4th of July and what better place to spend it than the last great battlefield of the Revolutioary War. We spent our day at Yorktown Battlefield, the Victory Center and the town itself. The ranger led tour was great and informative, even Daniel, a reenactor, thought it was well done. 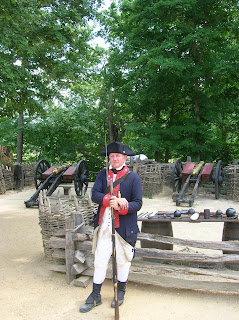