July 24, 2009
By: Andrew Bermudez
(Daniel and Andrew's House; July 24, 2009)
Yesterday, the Bermudez's 6-week long vacation came to a close. Even though the vacation was cut short by three days due to bad weather, they still had a wonderful time. Here are the details on the last days of the vacation.
Day 38: Today we drove on to the Gateway Arch in St. Louis. Here we visited the underground Jefferson National Expansion Memorial, which featured a museum about westward expansion. The entire complex, especially the arch, was very clean and impressive. Pity the same cannot be said about the rest of St. Louis. For the night, we stopped in Independence, MO. 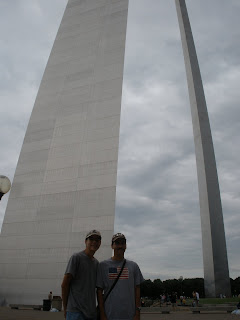 Day 39: Today we went into Independence. First, we visited the Truman Presidential Library. It featured all sorts of different artifacts, including the famous "The Buck Stops Here" sign. Afterwards we walked around town before a storm scared us back to our hotel. Oh boy. 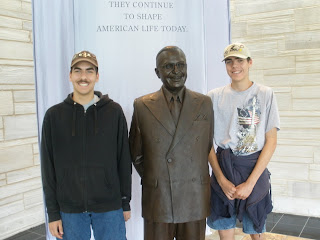 Day 40: Today we outran the storm as we drove nonstop through Kansas and to Denver, CO, where we spent the night.
Day 41: We continued west. Here, we stopped at the Dinosaur Journey Museum in CO. The museum featured many rare and unique fossils, hands-on exhibits, and animated dinosaurs. The museum also featured a short film, When Dinosaurs Roamed America. It was all very interesting. Afterwards we went to Cedar City, UT to spend the night. 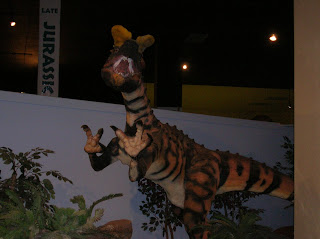 Day 42: The last day! Today we traveled through Las Vegas and to Primm, where we stopped at Buffalo Bill's for lunch. We were going to go on the log flume, but the laser guns for shooting at the targets along side the flume weren't working that day. How disappointing. We then continued on our way home. We finally reached home with the rewards of the vacation: a box load of souvenirs and a brain full of memories.
Vacation Statistics: