Vacation Update: At the Nation's Capitol

July 12, 2009
By: Andrew Bermudez
(Harpers Ferry KOA; July 13, 2009)
It has definitely been an eventful week on the Bermudez's six-week long vacation. Recently, they have not only gone to Washington D.C., but to Jamestown and Harpers Ferry as well. Here is a day-to-day update of the recent events.
Day 24: Today we went to Jamestown, the first English settlement in North America. The settlement featured living historians in a recreation of the settlement, the ships that brought the settlers over and a local Indian village. It was all very engaging and interesting, even though Daniel called the Indian village farby (a reenacting term meaning 'far be it from authentic'). Afterwards, we went to the original site of the fort. Here we saw artifacts from their ongoing excavations, as well as the foundations for some of the former buildings. We even saw a snapping turtle in a nearby stream. 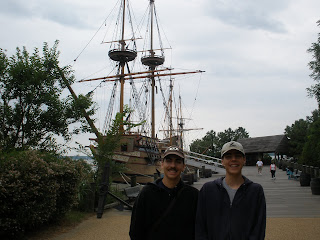 Day 25: We are now on our way to our nation's capitol, Washington D.C.! After leaving Williamsburg, we headed off to Fredericksburg, VA. Here, we saw the house where Confederate General Stonewall Jackson died, Chancellorsville Battlefield, where Stonewall Jackson was shot, and the house of George Washington's mother. Afterwards, we headed to the Washington D.C. KOA for some rest.
Day 26: Today we visited the Smithsonian Institution museums. Specifically, we saw the National Museum of Natural History and the National Museum of American History. We saw many rare artifacts, such as an Egyptian Mummy, a mummified cow, Union General Sherman's hat, George Washington's coat, Archie Bunker's chair from the TV show All in the Family, the original Star Spangled Banner Flag, original turn-of-the-century light bulbs, Abraham Lincoln's hat, and more. After we finished looking around, we returned to the campground to get some rest. 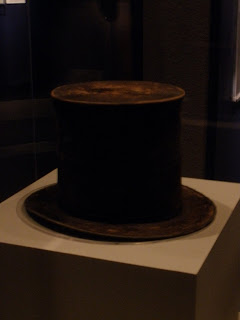 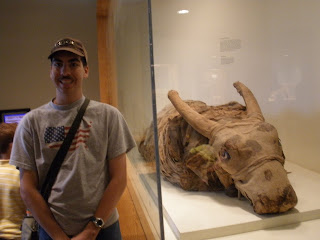 Day 27: Unfortunately, the bus into Washington D.C. was booked today. Instead, we went up to Baltimore to see Fort Mchenry. This fort is famous for inspiring Francis Scott Key to write our national anthem. At their visitor center we saw a film about the Battle of Baltimore during the War of 1812. Afterwards, we went into the actual fort itself, where we saw original cannons, a museum about the history of the fort's usage as a fort, a prison, and a hospital, earthworks, and the flagpole that flew the Star Spangled Banner Flag. We then returned to the campground to get some rest.
Day 28: Today we were able to get onto the bus to Washington D.C. Once there, we headed over to Ford's Theater, where Lincoln was assassinated. Below the theater was an Abraham Lincoln museum that featured the gun John Wilkes Booth used to carry out his crime. We then headed upstairs into the theater where a historian told about that fateful night. Afterwards, we saw the White House, the Capital Building, the Washington Monument and the Lincoln, Jefferson, World War II, Korean War and Vietnam War Memorials. On our way back to the bus stop, we visited the National Air and Space Museum. Here we saw some early airplanes, Charles Lindburg's Spirit of St. Louis and the Apollo 11 capsule. We then returned to the campground. 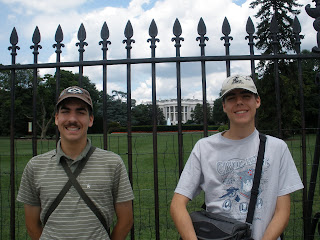 Day 29: Today, after getting lost in downtown Washington D.C. for an hour and a half, we traveled to the National Zoo. At the zoo, we saw many exotic animals, like the Giant Panda, Elephant Shrew, Orb Spider, Sloth Bear, Pygmy Hippo, and others. This is one of my personal favorites attractions on the whole trip. 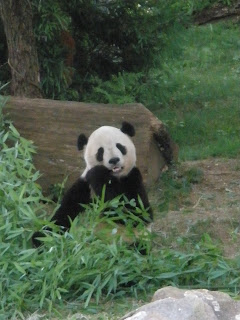 Day 30: It has been one month since we left on our trip. Today we left the Washington D.C. KOA for good. But before we left our nation's capitol, we stopped at Arlington Cemetery, where several famous Americans are buried, and the United States Marines Memorial, which depicts the flag raising on the Island of Iwo Jima during World War II. Afterwards, we visited an air and space museum at Dulles Airport where we saw the X-35. This airplane is special to us because our dad helped design it. We also saw the Enloa Gay, the bomber that dropped one of the atomic bombs on Japan, experimental German aircraft and more. Afterwards we headed out to the Harpers Ferry KOA for some rest.
Day 31: Today we visited the town of Harpers Ferry, famous for John Brown's raid in 1859. We not only saw the John Brown fort, but also the Harpers Ferry Battlefield, several museums and the remains of an old factory. It was all very educational and interesting, especially the living history event depicting the town's occupation by the Union. After this, we went back to the campground. 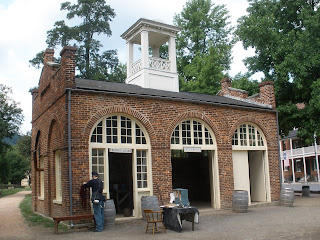