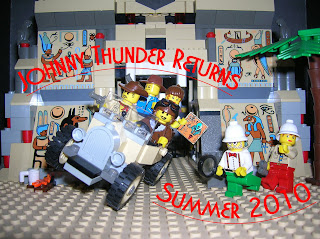 By: Andrew Bermudez
(Lego Studios; June 7, 2009)
In August 2008, the world fell in love with Johnny Thunder and the Secret of Marco Polo, and new fans of the movie have discovered it since. Everyone laughed at Patrick's random comments, shed a tear when Billy the Kid died, and sat on the edge of their seats during the Battle for Xi'an. The longest brickfilm in existence had become an international hit.
Now, Johnny's back in the sequel Johnny Thunder and the Gift of the Nile. In the film, Johnny gets a letter from Egyptologist Hiram Aziz which states that he has found something on the mummy of Ramses III that will strike his attention. So Johnny, along with Pippin Reed Thunder, Sarah Thunder, Dr. Charles Kilroy, and Harry Cane, head to Egypt to find out more. The soon discover that Hiram has found a map that leads to the Heart of Osiris, a large ruby that can supposedly bring people back to life. But Lord Sam Sinister, along with his bungling henchmen Patrick and Horatio Schmidt, find out about the treasure and race against Johnny to its hiding place. Worse yet, Lord Sinister also has hired Russian Mercenaires and black market leader Slyboots on his side. Will Johnny find the Heart of Osiris, or will his nemisis finally win in the end?
This information was unveiled along with the film's teaser, which depicts random actions by the characters. "Like we mentioned in the past, the footage in the teaser will not appear in the final movie," said Steven Lawrence, the film's director. "We mainly filmed these scenes to give people an idea of what the movie will be like and to show which characters will appear in it." Gaffer Sam Reynolds added, "The main reason why we released the teaser so early is because several fans of the first movie have been anxious to find out more about this sequel."
As for the film itself, filming will not begin until late Summer 2009 and is expected to end Spring 2010. The film will be released Summer 2010. Until then, the studio plans on releasing some short films this fall, including the morality play Black Friday.
Johnny Thunder Movie Announcements Sneak Peeks