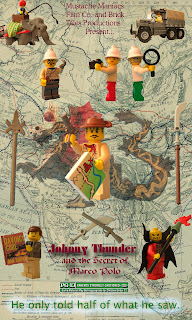 By: Andrew Bermudez
(Lego Studios; March 19, 2008)
On March 19, 2008, after many rumors circulating at the local hair salon about the latest epic brickfilm, Lego Studios has agreed to release a few plot details to the public.
“In the movie, there will be a revolution going on in China,” said Mark Matthew, head of the schedule committee. “This revolution will be like no other in the history of brickfilms. This sub-plot serves as a backbone to our main story, which eventually comes together with the revolution. This also gives us a chance to get the evil tyrant from the Orient Expedition Lego sets, Chang Wu, more involved in the story.”
The film crew’s location manager, runner, and blood-sucking lawyer, Dracula, also had a few spoilers to reveal. “The story will remain relatively the same to the online comics on Lego.com, with only a few changes. The most notable is that the Maharaja Lulla character and his whole sub-plot have been removed, and Tygurah now acts as a guard to the Scorpion Palace.” The boom operator, Sarah Williamson, related, “We also embellished Johnny’s struggle to get the Golden Dragon by letting Lord Sinister take the Golden Sword.”
However, controversy sprang up when script supervisor Martha revealed that famous movie scenes would be adapted for ‘Marco Polo.’ Joey Newsprint, reporter for the Brick Street Journal asked, “It appears that the script writer turned to other sources for inspiration. Why has he done this? Couldn’t he just render originality into the script?” Martha, in defense, stated, “I talked with the script writer on this. He said that the reason why he did this was to recreate classic movie moments, all the while staying true to the script. After all, when’s the last time the helicopter attack from Apocalypse Now or the 3 questions from Monty Python and the Holy Grail have been rendered into Lego bricks?”
Yet it was the news Director Steven Lawrence let out that shook the press conference. “The famous author Dan Brown is a character in the film,” said Steven. “And as a tribute to him, the beginning of the film is similar to the way The Da Vinci Code starts.” This revelation came along with the first public exhibition of the film’s poster, featuring a close-up of Johnny Thunder holding his pistol and a map of China. Around him are smaller photos of characters, vehicles, and weapons.
As for the production, filming is expected to be finished on May 10th. Voice recordings are expected to start mid-July and the film is expected to be released on August 25th. The film has been rated PG-13 for creature violence, language, action violence, and scary images. As for myself on the film, I am very excited about the film and I certainly can’t wait for it’s release, especially after seeing the trailer.
Johnny Thunder Movie News Sneak Peeks