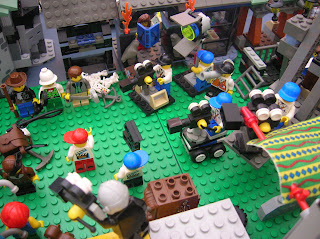 By: Andrew Bermudez
(Lucknow; August 9, 2007)
The filming for the latest epic brickfilm, Johnny Thunder and the Secret of Marco Polo, has mostly been running smoothly and on time. Yet, there have been a few problems.
Take the cow incident in Lucknow, India as an example. No shooting was done yesterday, so the cast and crew could be given time to relax. It was during this time that the camera truck was repositioning for the next day’s shoot when a small herd of cattle hobbled out into the street, blocking the camera truck’s path. Knowing that he needed to get the truck into position within 20 min., Peter, the crew member driving the truck, blew the horn as loud as he could.
Unfortunately, this did not get the cows’ attention. Instead of budging, the cows laid down and slumbered. Incidentally, a man in his late 30’s darted over to the truck and started cussing Peter out. It was at this point when Liame Lense, another crew member, ran over to soothe the local. However, the local would not stop. He kept cussing and cussing until he noticed that the cattle woke up, got up, and walked away. At this point the man simply reentered the crowd. Peter looked confused. But, all that Liame could give was a basic shrug. He then joined Peter on the camera truck and they sped off towards the movie set.
Johnny Thunder Movie News Movie Set Stories