The Complete Guide to all of the Hidden Extras in Johnny Thunder and the Secret of Marco Polo. 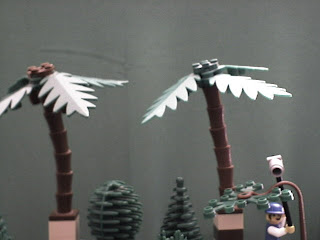 By: Andrew Bermudez
(Lego Studios; February 11, 2009)
Recently, the public asked the head of Lego Studios, Mark Matthew, about the hidden extras in Johnny Thunder and the Secret of Marco Polo and where to find them. So, director Steven Lawrence compiled this list yesterday, telling the location of every hidden character, stagehand, and gold brick in the film:

Gold Bricks:
Gold Brick 1: This hidden extra is actually a piece of the chair that Mong Hu sits on inside General Mao's headquarters. It's a little hard to see, but it's there.
Gold Brick 2: Inside the Coughing Dragon Opera House, a gold brick is part of the post that supports the balcony that Johnny and his friends sit at.
Stagehands:
First Unit Cameraman: This one is very hard to see. When we see Xi'an for the first time (near the beginning of the film), some guards execute two civilians. On the other side of the shooting, you can see the 1st unit cameraman taping the action.
Wind Machine: In Venice, you can see a grip man operating a wind machine along the side of the canal. You can best see it when Johnny, Pippin, and Harry are riding in the gondola.
Mobile Camera Unit: When Johnny and his friends leave the Marco Polo Museum, you can see a mobile camera unit behind them. This one is also along the side of the canal.
Best Boy: Flash forward to Lord Sinister's hut in India. After the henchman tells Lord Sinister that the thieves arrived, he gets dismissed. As the henchman walks out the door, you can see the best boy standing outside the door.
Boom Operator (pictured above): After Babloo yells, "Go on, girl," he whips the elephant, sending it forward. As the elephant leaves the frame, you can clearly see the boom operator hiding in the trees.
Production Assistant: Up in the Himalayas, Dan comments on how far they've traveled. Behind him, you can see the production assistant hugging the mountain. Look quickly, because this stagehand disappears later.
Stuntman Catapult: When Jing Loo dies, look on top of the building that's in the background. You can just make out the base of a stuntman catapult.
Script Supervisor: When Johnny and his friends arrive at the river in China, look for a hidden stagehand. He's behind a bamboo shoot, and is most visible when Harry says, "Ah, I see."
Assistant Director: When Johnny and his friends get captured in the Dragon Fortress, a rebel says, "Hands up!" During this line, you can see the assistant director standing behind her, who looks a lot like Johnny.


Characters: (There are a lot, so I'll just cover the most noticeable.)
Drunk Bum: At the very beginning of the movie, when we see the Marco Polo Museum for the first time, there is a bum sleeping on the sidewalk. He also dropped his wine glass.
Astronaut: An astronaut is standing right by the car that explodes in Xi'an.
General Grievous: In Xi'an, you can see part of General Grievous while Lord Sinister is talking outside after the helicopter attack.
The Joker: This one's an easy find. In Venice, he is standing on a white balcony. He is best seen from the panoramic shot.
Radia: She's hiding in the same scene as The Joker. She's ordering fruit from the market.
Anakin: In the scene where the waiter is sweeping up garbage, you can see Anakin reclining on a bench.
Professer Quirrell: In Lucknow, India, this defense against the dark arts teacher is riding on top of the bus that tips over.
Rebel Pilot: This Star Wars character can be spotted in the panoramic shot of Lucknow, India. He seems to be hanging around a small shop.
Jayko: In the same scene, this blue-armored knight is strolling across the market place.
Senor Palomar: This villain is hanging out by the voodoo shop in the same shot.
Infomaniac: When the civilian hides inside the coffin, you can see the the Infomaniac standing behind it.
Torgo: Yes, even the man with the giant kneecaps from "Manos," the Hands of Fate had to get in somehow. He is the last to flee in Lucknow when Dr. Kilroy says, "Sting of the jungle."
Indiana Jones: This classic adventurer is hiding in Kathmandu. He appears to be standing on a terrace above Climb "R" Us.
Clone Trooper: When Lord Sinister hijacks the car in Kathmandu, you can see a clone trooper standing in a balcony.
Digger: This Dino hunter from Dino Attack can be seen at the Kathmandu Airport. He's standing on the balcony the leads to the helipad.
The Master: The villain from "Manos," the Hands of Fate can be seen performing the prologue for Mulan.
Hidden Images Guide Johnny Thunder