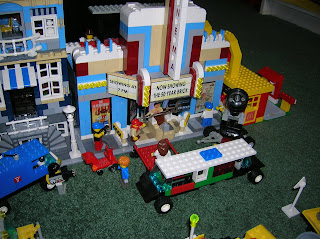 By: Andrew Bermudez
(Legotown Cinema; April 25, 2009)
Since January, the studio has been working hard on getting their latest film, The Adventures of Legoman, finished. Now, only a day late, the studio has now released the film to the world. "It has been so honorable and fun to work on the film, and now, it's finished," said director Simon Johnathon.
At the premiere, the film's cast and crew attended, as well as local critics, the board of directors, the press and several fans of the short stories. One of these fans gave his opinion on the film. "It was awesome," said the fan. "I loved how they stayed true to the stories, while making it entertaining for people who have never read the stories. I also loved the chase at the end." Also, Jimmy Newsprint, reporter and critic for The Lego Times, said that the film was, "hilarious, family fun."
With this praise going around, the studio is hoping that, despite the economic downturn, the film will be a big success. "Combined with the positive reviews and popularity of the 1960's Batman, I am confident that The Adventures of Legoman will be a box-office smash," stated Mark Matthew, head of the board of directors.
However, after the film, Jimmy Newsprint was badgering Mark about Johnny Thunder 2. All Mark was able to say was, "All I'm alowed to say at this point is that it takes place in a location we're all familiar with. Until it's release in the Summer of 2010, the fans will just have to see the teaser coming this Summer." Until then, the studio will be releasing another brickfilm this Fall.
Film Release Announcements Legoman Movie News