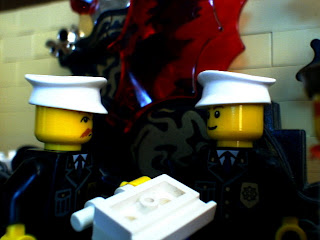 By: Andrew Bermudez
(Cafe Corner; March 14 2009)
Two days ago, the first The Adventures of Legoman promotion started, which was a series of toys given out at the local Cafe Corner restaurant's Klutz Kidz meal. "With the economy going downhill, it has become a top priority that we get the word out about our films early, and a promotion like this one is our best option," said Mark Matthew, head of the board of directors. "Even though the film doesn't come out for another month and a half, this promotion will surly do well and get people excited about the film," said director Simon Johnathon.
Here is a list of all of the toys, along with their descriptions:
Wind-up Legomobile: Help Legoman speed to the scene of the crime by pulling back this mini Legomobile. Then let it go and watch it race across the room!
Action Suit Legoman: This Legoman action figure has all of the gadgets he needs to stop Legotown's crooks. From his flick-fire grappling hook, to his forearm armor, this figure is full of surprises!
Tongue-Twisting Trick Tulip Mister: This device won't cause you to lose your voice. But with the summer coming, it'll surly help you stay cool.
Rubber Chicken Launcher: This small device can launch the included rubber chickens! Simply aim, pull the lever, and watch it fly! Lego Studios and the Cafe Corner are not responsible for any injuries caused by the rubber chicken launcher.
Police Investigator Kit: Now you can solve crimes with this special kit, just like Officer Max! The kit includes fingerprint cards, fingerprint duster, magnifying glass, notepad with pencil, officer's hat, badge, and three zip-loc bags, all with the Legotown Police Department's insignia!
Police Flashlight: Now you can own a police flashlight, just like the one Captain Bill uses! Requires 2 AA batteries to operate (not included).
The toys will be given out until May 17, 2009.
Legoman Supplemental Material